Summary: A significantly smaller pinenut tree that bears very large cones with large pinenuts of nutrional value second only to Pinus pinea. It is probably tolerant of a wide variety of soil conditions, as long as drainage is good. Time from seedling or cutting to first cones is unknown. It is no longer available in New Zealand. It is possible to graft this species to a Pinus pinea rootstock, or may even find a use as a possible size-reducing rootstock for Pinus pinea, although this is speculative.

This is a rare pine nut species found only on an isolated Mesa in the wilds of Mexico (recently another small population has been found). It was first discovered in 1964.The common name is Martínez piñon ('pinyon'), and increasingly commonly 'maxipiñon'.

The cones are very large, and the seeds are also very large (about 6 grams each, fresh weight), although the seeds have a very thick shell. Apart from size, the seeds are remarkable for their high protein content - around 30%, second only to Pinus pinea, one of the major 'pine nuts' of commerce.

Some time around 2005-2007 (at a guess), I bought four cutting-grown plants from Cedar Lodge nurseries in Taranaki. I have always assumed they are all from the same tree, and therefore identical to each other genetically.

They have grown here quite well, (they are about 4 metres tall and wide), and all four trees developed their first ever male flowers in the spring of 2013. So far, I haven't found any information to say whether or not they are self fertile. My working hypothesis is that they aren't, and I am going to need an unrelated tree to cross pollinize with.

The trees are now more or less globe shaped, and somewhat open. I trimmed some side branches that were in the way, which was a mistake, as these have mostly died back.

Apparently this species does have dormant buds under the bark (epicormic buds), but these may not be triggered unless there is major damage to the trunk. Update April 2012 - 3 out of the 4 trees here have a few tiny shoots growing low on the trunk. I assume these are from epicormic buds. 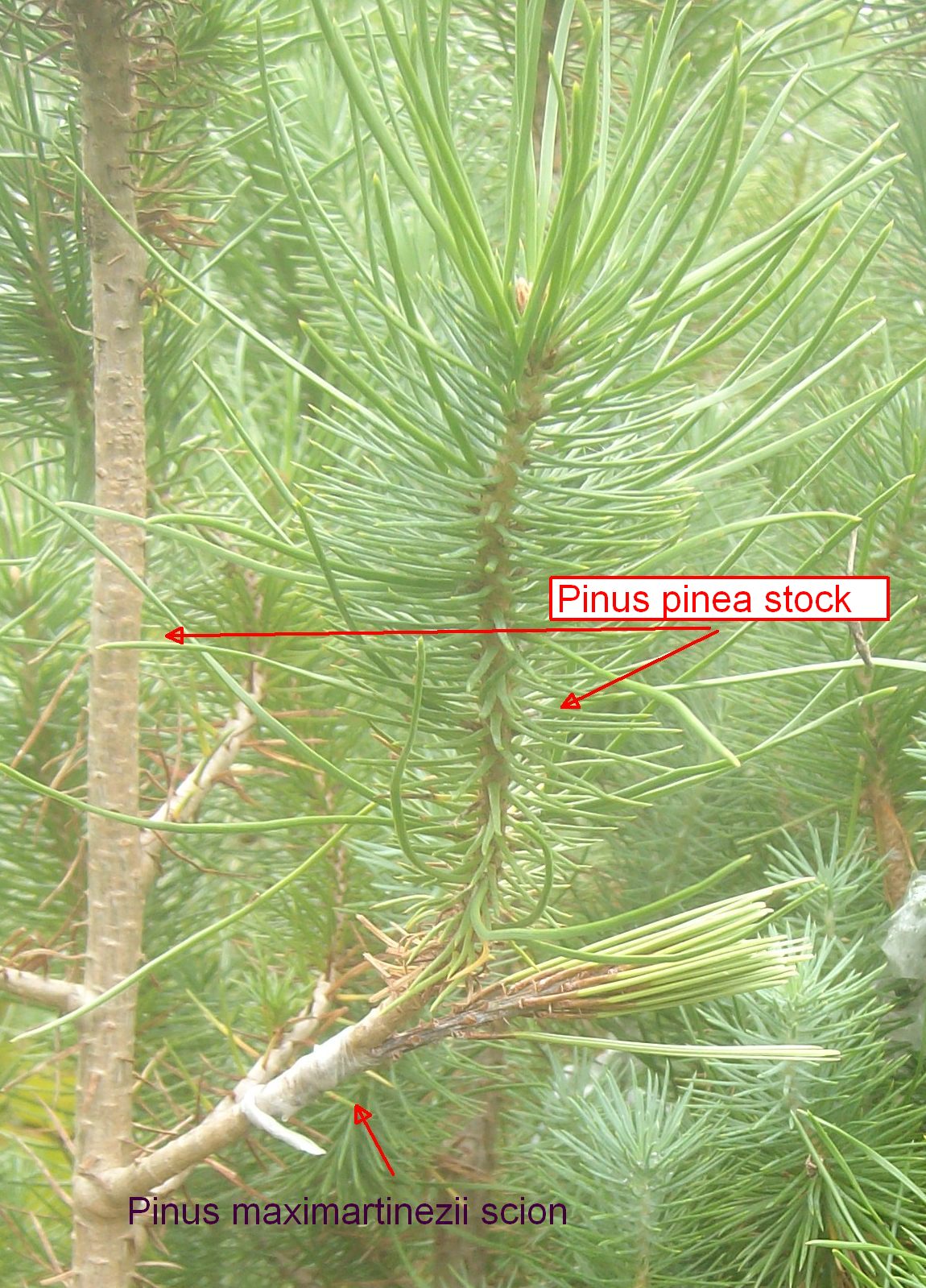 In autumn 2012 I grafted some wood of P. maximartinezii into Pinus pinea. There was a brief reference on the internet from an Australian pine grower saying that the species are graft compatible, although the union is very rough. This success with grafting Pinus maximartinezii onto P. pinea opened the way to grafting an unrelated P. maximartinezii scion onto both the trees in the ground, and a couple of trees destined for growing in tubs.

There are unrelated trees in New Zealand. Cedar Lodge no longer sell P. maximartinezii (and were not long ago appealing for seed sources for some of the rarer conifers that had been introduced to New Zealand prior to the new additional MAF controls put in place in mid 2002 to mitigate the risk of bring in the devastating pitch pine canker disease, Fusarium circinatum).

Trees were available from at least one New Zealand nursery in the mid 1980's. Seed was also distributed by the late Loy Shreve, (Texas Cooperative Extension Forestry specialist) in the mid 1990's.

12 months on (30 march 2013), and the scion has made some good growth. The stock has just been cut back. The tips of all the lower Pinus pinea stock side branches have been cut back repeatedly to encourage the maxipinon to become dominant. This has caused the stock to produce short-leaved, blue-green juvenile foliage.

Some scions from unrelated trees were finally obtained in summer 2013. Some of these grafts into the trees in the ground here look promising as at mid june 2013 (in spite of the 2013 drought). Scions obtained and grafted in autumn (from a different source) all failed.

Unexplained graft union failure some years after grafting is a recognised phenomenon in pines. Just because maxipinon grows successfully when grafted to a different pine species does not guarantee the graft won't fail by five years time. One paper,[1] concluded that (in the 5-leaf pines tested) compatible grafts (those that grow well and survive long term) "usually" formed smooth graft unions, and no "abnormal" swellings occurred at the graft.

Semi-compatible rootstocks also formed good graft unions, and grew well for 5 or more years, but gradually showed swelling at the graft union and "weakened" growth rates. However, they also started flowering heavily around this time.
Semi - incompatible rootstock-scion combinations grew weakly, and generally failed at or soon after 5 years. However, the odd individual plant was the exception to the rule, surviving well long term.

The grafting technique used by the authors of the 1972 paper was a "side slit" graft on the terminal branch of the rootstock. I first used side veneer grafts, but these tend to lift, and more lately have used simple wedge grafts on the terminal shoot. Wedge grafting might result in a rougher graft union no matter how compatible the stock and scion. I have tried a couple of whip and tongue grafts, but these have failed, as have my few attempts at the "side slit" graft.

Pinus maximartinezii appears, so far, to be 'provisionally' graft compatible with P. pinea and P. armandii. Given P. armandii appears compatible, the similar Eurasian Strobus species P. siberica, P. koraiensis, and P. cembra should also be tried. Pinus mugho is also know to be compatible with many 5 leaf pines (a single graft on P. mugho has survived so far - P. mugho is a very small shrubby pine, so may ultimately be unsuited as a rootstock).

Pinus pinea is an attractive proposition as a rootstock due to its wide adaptation to various soils, and its drought resistance.

Very little is published on rootstock compatibility, so much is trial and error, and results are a very long time coming. Ideally, this tree would be grown on its own roots, either as seedlings, or cuttings.

My attempts to grow trees from cutting have failed; albeit one cutting produced a few fine brown roots, but in the end, did not establish. A few attempts at marcots have so far failed.

Pinus armandii has proved to be graft compatible with
P. maximartinezii, but if it will endure in the long run is as yet unknown. (Several grafted plants on this combination have died, but further investigation showed the rootstock had died from root rot, possibly Phytopthora.

Left: maxipiñon grafted onto P. armandii seedling stock. The large mushroom that appeared in the pot is probably the burgundy mushroom, Stropharia rugoso-annulata. I bought inoculum some years ago, and while they seemed to have died out, the last few years has seen their return - probably due to my increasing use of fresh woody mulch (which I have also put on top of the pots of grafted maxi).

It is not a mycorrhizal species, so doesn't help the pine, but it doesn't seem to have done any harm. Some reports claim it 'boosts' soil fertility. Maybe, maybe not. But young fruiting bodies of this species are edible (it 'fruits' in summer, after rain). And growing in a plant pot has the advantage of protecting it from marauding hedgehogs, which normally eat the fruiting body before or soon after it emerges through the wood chips.


Experiments with a few stocks of other Pinus species show greater or lesser promise, but my success rate with any species remains dismally low. It is of no comfort that one of New Zealand's most experienced and skilled conifer grafters has yet to succeed with this species.

Much remains to be learned.

References
[1] Ahlgren, C E 1972. 'Some effects of inter-and intraspecific grafting on growth and flowering of some five-needle pines'
Silvae Genetica, 21, 3-4 1972